Adam Hardin, an avid amateur diamond hunter and frequent visitor to Crater of Diamonds State Park in Arkansas, recently landed a 2.38-carat brown sparkler — the largest found at the park this year.

About the size of a pinto bean, with a coffee brown color and irregular rounded shape, the diamond was discovered on April 10 near the East Drain of the park’s 37.5-acre search area. Treasure hunters get to keep what they find at the only diamond site in the world that’s open to the general public.

The search area is actually a plowed field atop the eroded surface of an extinct, diamond-bearing volcanic pipe. Visitors have found more than 33,100 diamonds since the Crater of Diamonds opened as an Arkansas State Park in 1972. About 260 diamonds have been registered this year, so far. 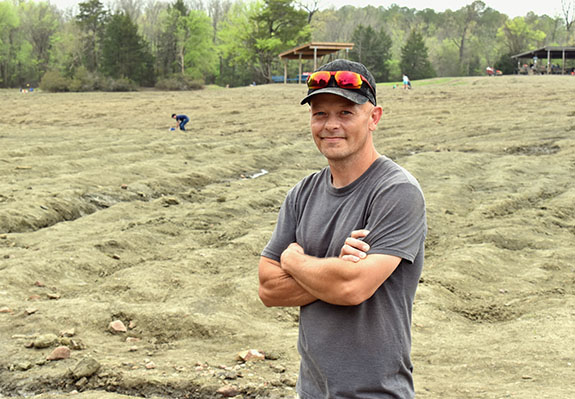 Hardin has been visiting the park for more than a decade and claims that he has found hundreds of diamonds during that time, although his most recent discovery is the first that weighed in a more than 2 carats. He used a wet-sifting method consisting of a "screen set" and a basin of water to wash away soil and separate the gravel by size. Smaller gravel is then shaken vigorously, which moves the heavier material, such as diamonds, to the bottom of the screen.

“It was right in the middle when I flipped my screen over," Hardin said. "When I saw it, I said, ‘Wow, that’s a big diamond!’”

Hardin carried his gem in a pill bottle to the park’s Diamond Discovery Center, where staff registered it as a 2.38-carat brown diamond.

Park Interpreter Waymon Cox said the stone exhibited a "metallic shine typical of all diamonds found at the park, with a few inclusions and crevices running all along the surface."

Prospectors who find the largest stones get to name their diamonds, and in this case Hardin is calling his newest treasure "Frankenstone."

“I thought of the name because it has a pretty — and kind of not-so-pretty — look to it," Hardin explained. "Us diamond miners call that 'character!'"

Hardin explained that the park's regulars enjoy the friendly competition to see who can land the largest stones.

“One of the other guys and I have been going back and forth, seeing who can find the biggest diamond," Hardin said. "I found a big one, then he got a 1.79-carat, and we were joking about who would find the next big diamond and be ‘king of the mountain.’ As soon as I found this one, I had a feeling I had him beat. Now he's trying to find a bigger one, but I'm planning on staying on top!”

Hardin’s diamond is the largest found at the park since last September 2021, when a visitor from Granite Bay, CA, discovered a 4.38-carat yellow gem on the surface of the diamond search area.

The park reported that Hardin typically sells his diamonds locally and that he also plans to sell the 2.38-carat Frankenstone.