Diamond's Amazing Properties to Revolutionize the World of Quantum Computing

Japanese researchers have created an ultra-pure, two-inch-wide diamond wafer that has the storage capacity of 25 billion gigabytes. That's equivalent to the information on one billion Blu-ray Discs or the amount of data distributed by all the world's mobile devices in a single day. 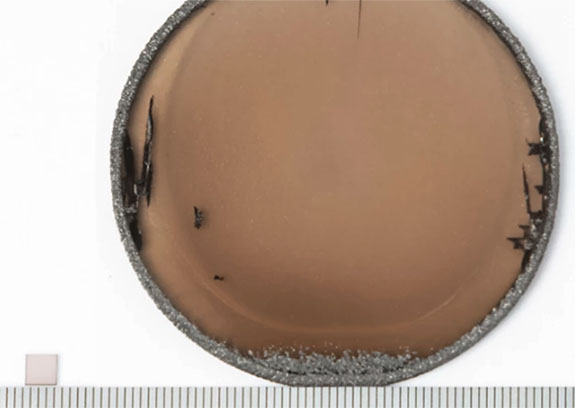 Developed by Adamant Namiki Precision Jewel Co. and Saga University, the "Kenzan Diamond" will make its debut at the International Conference on Compound Semiconductor Manufacturing Technology in Monterey, CA, from May 9 – 12. The wafers will go into production in 2023 and could revolutionize the world of quantum computing.

Conventional computers use processors made from silicon chips, but researchers are now experimenting with diamonds as a superior substitute. A minuscule defect in a diamond crystal — know as a nitrogen-vacancy center — is the key to data storage. But, if there is too much nitrogen, it won't work efficiently.

Adamant Namiki Precision Jewel Co. and Saga University improved its production method to achieve an ultra-pure wafer with no more than three parts per billion of nitrogen, making it ideal for quantum applications.

Previous limitations in production methods allowed for diamond wafers only 4mm square (See the tiny wafer in the lower left of the image, above). These wafers were made by growing crystals on a flat substrate material. They were designed in this size because they were vulnerable to cracking.

The new 55mm wafers are grown on a step-shaped substrate, which spreads the strain horizontally and makes the wafer less susceptible to cracking even though it's much larger.

Beyond being nature's hardest naturally occurring material, diamond also achieves impressive marks when it comes to its chemical, physical and mechanical properties — and that's what's got the scientific community buzzing.

The researchers at Adamant Namiki Precision Jewel Co. and Saga University are already working on a project to double the diameter of the Kenzan Diamond to four inches.

Techradar.com pointed out that at a time when corporations are returning to tape storage to help fend off ransomware attacks, diamond wafers could provide the answer for the high-capacity storage needs of the future.